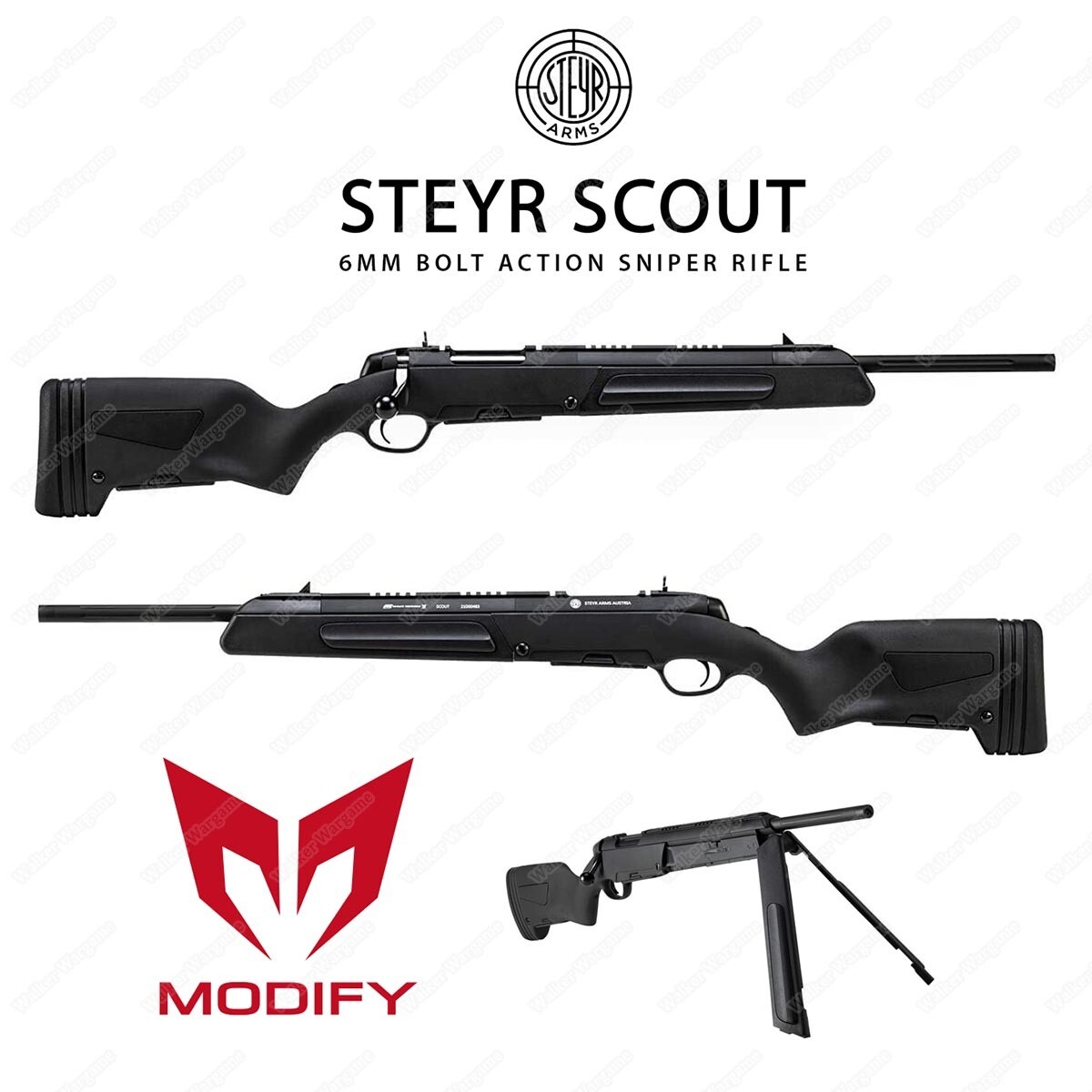 Famous for the well-known video game Counter-Strike, this Steyr Scout is the emotion-stirring airsoft replica that has been part of many of you growing up. With authorization from the real gun maker Steyr Arms and licensed by ASG, we're bringing an upgraded gun so you may relive your fond memories.

➤ Cooperate with Team ASG and fully licensed by Steyr Arms

➤ Airbrake piston out of the box

➤ Enlarged cylinder set with over 12.5% bigger volume than MOD24

➤ Extra storage for tools and a spare magazine

(Scope & Silencer is not incl)

The first authorized manufacture of a sniper rifle, the Scout is lifelike with all the markings and 8 different patterns on the stock being faithfully duplicated and certified by one of the biggest licensing companies, ASG.

Just like the real Scout, ours has the integrated bipod that is easily actuated by pressing the button on the lower side.

Our Scout satisfies airsoft players' demand for convenience and accuracy when adjusting the hop up for trajectory, giving players both adjustment lever and TDC mod out-of-the-box.

Each and every Scout made by Modify Tech is 100% airtight, having been tested by our specially-made instrument.

The dual cosmetic magazines on the Scout's stock actually are functional, being extra storage for small tools and a spare magazine.

The Scout comes standard with the newest Predator bucking, which is the result of our extensive R&D to enable players to shoot farther than rivals even with heavy 0.48g BBs.

Despite the success and popularity achieved with our first sniper rifle MOD24, we listened to our users who suggested that the airbrake piston, newly designed with new materials, be also installed in the Scout, giving players not only accuracy but also stealth.

Compared to that on the MOD24, the Scout has a steel cylinder 12.5% bigger, enabling players improved muzzle velocity and stability.

As before the Scout comes with a translucent, enlarged magazine that not only enables smooth loading but also viewing of BBs remaining, as well as being compatible on the MOD24.

With a nylon fiber body, the Scout feels like the real gun offering players unsurpassed realism and improved structural strength.