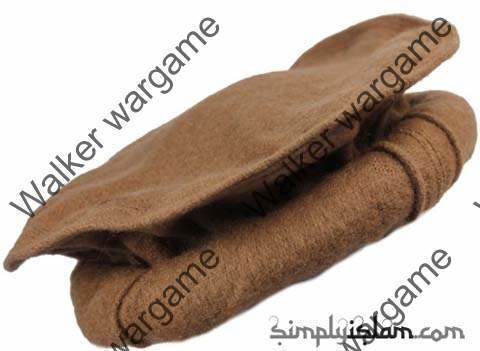 The pakol is part of the Chitrali Khow culture, and got its popularity during Afghan war when mujahideen members started using it, as it was an excellent alternative to the Pashtun turban. Today it has become an integral part of Pashtun culture all over the world, and that is one of the reasons it became one of the major items sold by Chitrali business men outside Chitral. In Peshawar there is a market called Chitrali bazaar, and one of the major products is the pakol. Originally the pakol was made from Chitrali patti, a woolen cloth made from hand-spun yarn,[1] but due to high prices and scarcity of Chitrali patti, business men started making it from other sources also.

The hat may have originated in the Chitral and Nuristan region. However, its ancestor is perhaps the remarkably similar ancient Macedonian kausia.[2] It gained popularity among the northeastern Pashtun tribes in the early twentieth century. It is also popular among the Tajiks of Panjshir and Badakhshan, and is also worn in Gilgit–Baltistan including Hunza, and some northern regions of Jammu and Kashmir.

The patti is first sewn into the shape of a cylinder, about a foot or more long. One end of the cylinder is capped with a round piece of the same material, slightly wider than the cylinder itself. The woolen cylinder is then inverted and fitted onto a round wooden block. The rim of the woolen cylinder is then rolled up to the top. The flat top protrudes a little over the rolled-up edge to give the cap a tiny brim. Otherwise, all Pakistani headwear, unlike Western hats, is brimless. This is because Muslims pray with their heads covered. A brimmed hat would interfere with the sajdah (act of prostration during prayers). The little brim of the pakol, however, presents no such problem.

In Chitral, and Gilgit-Baltistan, the white color pakol is more popular and is sometimes worn with a peacock plume stuck in the folds, like a badge, on the front or the side of the cap. The deep blue and green of the peacock feather, set against the white of the cap, is quite eye catching.

Because of the woolen material, the pakol is basically a cold weather cap. In particularly chilly weather of Nuristan, the cap can be unrolled and pulled down over the ears, like a ski cap. Worn this way, it may look sloppy but is effective against the cold. The Afghan military leader Ahmad Shah Massoud is often shown in photographs wearing a pakol.